Saved By My Nerf Bars | 4wheelparts.com
Welcome Guest
Sign In

Saved By My Nerf Bars

The holiday season is in full swing, with many people travelling for Christmas and New Year's to visit friends and family. As the weather turns colder and wetter, it is important that we all remember to be safe on the busy roads this time of year. As a reminder to travel safely, here is a story from one of our customers about what happened to his family last spring.

Around 6:30 p.m. on May 17, Greg Ewart was driving home with his wife and two children when a young woman in a 2002 Pontiac Grand Prix struck the side of his Jeep hard enough to spin the vehicle 180° and lay it out on its side. His beloved 1980 CJ7 was totaled, but everyone involved walked away with only minor injuries. According to Greg, it was his Smittybilt nerf bars that saved them from irreparable harm.

“She caught us pretty much right in the middle, right where the nerf bars are. I remember the Jeep spinning around, then we hit the curb and it tipped on its side … If the nerf bars weren’t there, it would have crushed the body in. It would have at least crushed my legs,” says Greg.

The force of the impact was so great as to crack the CJ’s chassis. The nerf bars, however, appeared unharmed.

Greg’s 14-year-old daughter Shelby was the first to recover and ascertained that everyone was alright. Greg climbed out of the mangled Jeep and helped to pull his wife, Deanna out as well. The two of them retrieved his 12-year-old son, Berkley, and his daughter from the back and moved to assess the damage.

“The Jeep was sideways and I thought to myself, ‘oh man, this was bad,” says Greg. They gave their information to the officers that rapidly arrived on the scene, then tipped the jeep back upright.

“The cops and firefighters were taking pictures and kept saying ‘wow, that’s a nice Jeep!’ I told them ‘Yeah, it was,’” Greg says.

The family a new Jeep three weeks after the accident: a 1979 CJ7. “You don’t get very many sunny days to drive with the top down in Minnesota. We weren’t wasting any time,” says Greg.

“We enjoy four wheeling and taking the Jeep out. Thankfully, this hasn’t scared us away from getting another Jeep,” he says.

Smittybilt doesn’t build its nerf bars for instances like these. “People just think of the bars as something to step onto to get in and out of the Jeep,” says Greg – and that is precisely what they are made for. It may not have been the job they were designed to do, but expert craftsmanship and the strongest materials available went above and beyond the call of duty in Greg’s case.

“My Smittybilt nerf bars saved me – at least my legs,” he says.

Smittybilt sent Greg a brand new set of nerf bars to replace the ones he lost – not due to damage, but because they were too well attached to his totaled Jeep to remove them and put them on his new one.

Here are the images of Greg's Jeep after the accident. 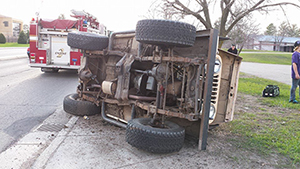 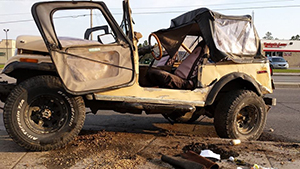