How Warn Industries Came to Dominate the Winch Business 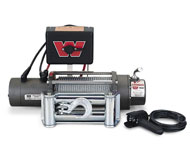 The winch is a piece of equipment that separates weekend warriors from serious off-roaders. It can move debris off the trail, get your vehicle over enormous obstacles, and drag your buddies’ rigs out of near-impossible situations. This vital, off-road accessory first became available in 1959, when the folks at Warn decided to manufacture a recreational winch.

Warn Industries shares its beginnings with the start of the off-road industry. In the 1940s, when off-road interest was just starting to pick up, the Warn family owned a Willys dealership. Arthur Warn, who would later found Warn Industries, got involved in converting WWII military Jeeps into 2WD. Shortly thereafter, Warn began producing locking hubs for Jeeps, giving consumers the option to switch from 4WD to 2WD, so they could enjoy a more practical level of street performance. These hubs were initially produced in a Seattle-based manufacturing facility.

In the 1990s, Warn moved the manufacturing facility to Oregon. Clackamas became home to the winch facility and the corporate headquarters, and the hubs were produced a few miles away in Milwaukie.

Today, Warn Industries manufactures about 500 products that make the off-road experience safer and more fun. Some of the most popular categories are ATV winches, truck winches, hubs, and fender flares and bumpers.

WARN truck winches range from light-duty to extreme-duty, and from simple to premium. The Self-recovery winches are great for lighter vehicles, because you don’t have to pay for more pulling power than you need. If you’re looking for a stronger, but less expensive winch, the WARN VR Series may have an option for you. These are basic units that range in power from 8,000 to 10,000 lb. A more premium option is the Thermometric Self-Recovery Winches which can handle loads of up to 9,500 lb.

The 9.5ti winch features an aluminum, die-cast body and powder coat finish for extra protection against weather and corrosion resistance. This ensures the winch will continue functioning reliably, no matter what type of weather it faces.

When you want to tackle an obstacle that’s bigger than your rig or a swamp that seems to have no bottom, you need to lock your hubs. Not only that, but you need to feel certain that your locking hubs won’t disengage. You can get this confidence from WARN Premium Hub Kits, which are built with the same focus on durability as WARN winches. These hubs are also backed with a limited lifetime warranty.

WARN 4X Fender Flares and WARN bumpers are designed with the same focus on reliability under extreme conditions. The fender flares are made of a high-impact material that’s flexible and strong. They also seal to the fender rim to keep out dirt, water, and debris. WARN bumpers, winch bumpers, and brush and grill guards are equally tough. The Heavy-Duty Winch Bumper, for example, features an all-steel construction and protective black powder coat. It’s also commercial-duty rated and fleet approved.

Browse an extensive selection of WARN winches and other accessories available for your vehicle now.