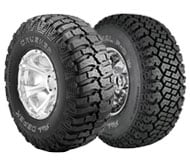 It's important to feel confident that your tires will handle the brutal beatings from off-road driving. When Dick Cepek tires are mentioned you get that confidence, because that's what Dick Cepek was all about. He went into the tire business because of his own need for better off-road tires. When he couldn't find any that he was happy with, he set about making them himself and eventually sold them to others who shared his passion for off-roading.

Before Dick Cepek became a household name, he was just a man who wanted to be outdoors camping and hunting as much as possible. But it wasn't until he moved to California that he started to encounter deserts that were just too rough for his tires to handle. Specifically, the sand was a lot softer and when his vehicle would sink into it, the tires just weren't built to get him out. What he needed was something wider that would cover more space and provide more friction. He eventually discovered a farm tire that he could adapt and make DOT-approved and street legal. This was the basis for the original Dick Cepek tires.

Of course, what happens when you upgrade to larger tires? You need larger wheels to go along with them, and since he had specially-designed his tires, there weren't any standard wheels that would fit them. Inevitably that became custom-made too. Once he had his very first set of Dick Cepek tires and wheels, it was time to share the love with his family and friends. Anyone who lived for the outdoors and off-roading could swing by the garage at Dick's house and get their own set of tires and wheels to take them wherever they wanted to go. The small amount of profit he made went towards weekend getaways to the furthest corners of the desert.

What changed everything was when he took the tires on the ultimate test: the 1000 mile run on the Baja Peninsula. Not only did the Dick Cepek tires make it the whole way, but he was so impressed with them that he coined a new standard for tires: Baja Proven. This propelled him into the official retailing world where he diversified with jacks, tents, lights, and plenty of other accessories designed for off-road needs.

Over the years, Dick Cepek tires continued to expand his business and experience great success. From foreign sales to wholesale divisions to catalogs, his products could be found everywhere. But the Dick Cepek tires were what remained at the heart of the business. He was always looking to improve upon his designs, which became much easier with the advent of computers. With improvements in tread, noise levels, and wear, Dick Cepek proved to be an innovator in his industry.

Today, Dick Cepek tires have merged with another large name, Mickey Thompson, to become one of the most recognized presences in the off-road industry.