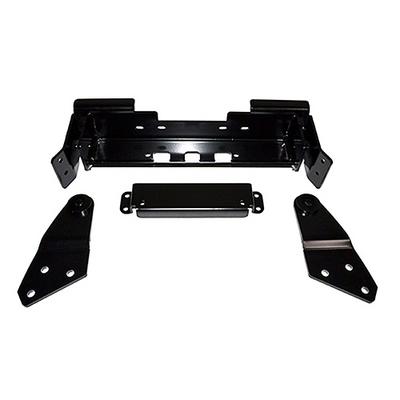 WARN ATV Front Plow Mount Kit has a rapid connection system with easy-on and easy-off application thanks to self-locating pin design. The mount is located/attached at the front of the vehicle, so there is no need to crawl under the ATV.

The bracket bolted right up to the quad. Within 10 minutes I had the plow on and was moving snow.

was a little let down by this mount, bought a whole system made by warn for ease of install and thought it was designed around my machine[...]went to install on my 2005 yamaha kodiak 450 which is stock other then tires, took front of machine apart and found out that the stock winch that was on machine was the one that didnt work with this mount, after buying new winch to fix problem and a 200 mile round trip to get it,bought a xt2500 which is what this app called for and said would work with this app, got it installed which was easy the first time around, got everything postioned and went to reinstall the front bumper and front of my machine and everything came to a grinding halt, the bottom of the winch was hitting the plow mount, checked and made sure that everything was made by warn and it was, after fighting every different way to get things back together and trying a couple different postions on the plow mount wound up having to take plow mount off and grind some notches into it so the winch would fit in place and be able to get everything bolted backup, was a shame to have to cut into that nice powdercoat, after getting it all together it worked great, the rest of the plow assy was easy to put together and all worked great, dont get me wrong this is a good product and maybe it was just my machine, was a little let down that it didnt work on the first try being as how well warn is knowen for their great products

The plow works great but--- It eats cables. I have to fix the cable about every other time I plow.

5.0 Front Mount better than I expected

I really like the front mount. Super easy blade attach and the system is out of the way. I have used both a frame (under) mount and now this. I can get my blade 4x higher with this system. It attaches to the frame so all of the concerns I had about durability were quickly put to rest. I really like this system.

I wanted something easy to use. This fits the bill. Nothing in the way when the blade is off not much in added weight. Ground clearance is not changed. up and down clearance is great, not like some with 6"

everything was as described [...] I have used the plow to push snow an it works very good also used it to level a pile of gravel it worked good for that also, the only problem the springs aren't really heavy enough for pushing gravel works good on snow.

Q: What kit is for the 2014 polaris rzr s 800 I have the warn pro vantage 60" for my king quad and need the center mount for my side by side Answer this question

A: Per Warn, for a Polaris RZR 800 part number 80681 is used for the front mount, but plow mount must use Front Mount ATV base/tube assembly (Warn PN 92100) and ATV blade

A: No center mount for the rzr 800’s. Currently Warn only has front mounts for all of the sxs or utv’s.

Q: Will this work with a 2000 Arctic Cat 400 4x4 and what would I need or require to make the application work? Answer this question

Q: Hello. I have an older Warn plow where the bracket that attaches to the ATV is 12 inches wide. I'm looking for the fixture that goes on to the ATV which will accept the 12 inch wide bracket. Thank you. Answer this question

A: Unfortunately no. This kit is for the Honda ATV models.

Q: plugged in vehicle and this came up (IH 76 Scout II) Doesn't list this as fit. We have a meyer plow will this work Answer this question

Q: does it ship with mounting hardware Answer this question

A: Hello Tom, Thank you for asking. The ProVantage ATV Plow Center Mounting Kit does include the hardware. This still requires you to have the push tube assembly and the plow blade.

Q: I tried to install this on my 2008 Polaris Sportsman 500 HO 4X4 does not fit? Answer this question

A: Thanks for the inquiry Dave, the Warn ProVantage ATV Plow Mount Kit part # WAR83110 according to the manufacturers website that is the correct part #. http://jo.my/tn2wbr

A: Thanks for the inquiry GEOFF, the Warn ProVantage ATV Plow Mount Kit part # war83110 this will require a new base assembly as well if you already have a pro vantage plow part WAR92100.

Q: Which of the Warn under carriage mounting kits will fit a 2005 Honda ATV Rancher 350 Answer this question

In 1948, Arthur Warn founded Warn Industries to construct locking hubs for surplus World War II Jeeps. Ten years later, the Warn winch was manufactured to fill the need for a reliable recovery tool to aid off-roaders stuck in challenging situations. Since then, Warn has grown to offer a wide range of gear with the hallmarks of durability and affordability. 1988 spawned the aftermarket industry's first ATV winch and today their PowerSports line of winches ranks among the most esteemed in the industry and jeepers call on Warn for electric, hydraulic and severe duty components that get the job done. Shop Warn Now