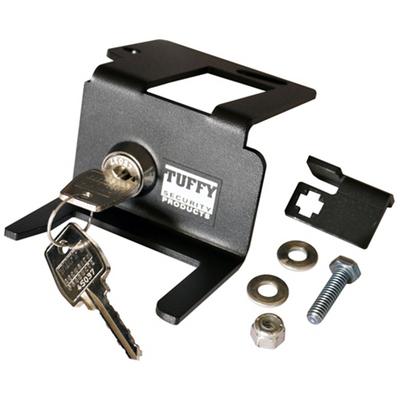 The only reasonably priced hood lock on the market that actually works! This hood lock is a simple one-piece design that secures the hood latch and deters thieves from walking away with valuable under hood parts such as batteries, intakes, superchargers, etc.

1998 Jeep TJ. Could not get the hood to close correctly. After forcing the hood shut, it would jam and you couldn’t pop it back up. Not a straight forward install, and would recommend a different way of securing your hood.

I purchased a new expensive battery and found the Tuffy Hood Lock to secure the hood from a single point. Other Jeep hood locks were part of or replacements to the rubber side latches. My only criticism is that a keyhole cover is not included with but instead offered separately.

It was easy to install. Works better than the cheap lock.

Good lock installed and works as described. Seems to provide some stabity with down draft. Will at least cause a thug an extra step towards getting battery and othe under hood items. The only con I gave is it should come with a dust cover. Once installed, it must be removed to install the prescribed dust cover.

works great & was very easy to install. worth every penny. would highly recommend to any jeep owner.

Great product, easy to install, works as described. Highly recommended to keep strangers out of your engin compartment.

This is an equally high-quality product with the OEM Mopar lock, at a fraction of the price. Highly recommended!

Q: Is this product hard to install, on my 2001 wrangler sport tj Answer this question

A: Hello It is a very simple install on the TJ's maybe a half hour to put it on. Thanks

Q: Do you have this product in stock,for a 2001 Wrangler sport tj Answer this question

A: Thanks for the inquiry august, the Tuffy Security Hood Lock part # TFY137-01 is in stock and ready to ship.

Q: Does this lock works for 2015 wrangler unlimited model? Answer this question

Q: Will this work on jeep wrangler X 2007 Answer this question

When it comes to locks and storage boxes, Tuffy's security products give the ultimate in security and peace of mind. Headquartered in Cortez, Colorado, Tuffy's employees have access to nearby Moab and Telluride with amazing trail that allow them to field test products. Among Tuffy's product offerings are door, hood, tailgate and bolt security and replacement locks and keys. Theft protection is serious business for Jeep owners and the company's trusted name and patented products stand for durability and security. Whether you're on the trail or parked in a shopping mall prone to break-ins, protect your hard earned valuables with Tuffy products. Shop Tuffy Now