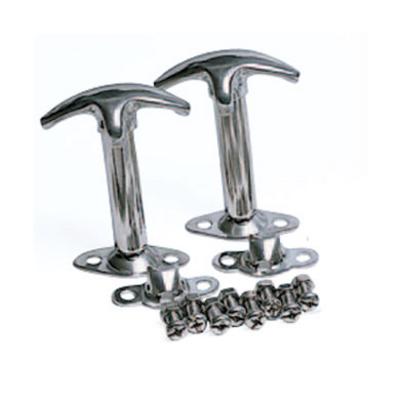 Replace those worn out factory hood catches with a new set of Stainless Steel or Black powdercoated catches. No drilling required, Sold in pairs.

5.0 Awesome! Worth every penny

Good price and easy to instal!

Good product for the money. Easy to install. The mounting hardware provided is a little smaller than the original. Looks good mounted. Just have to see how they hold up over time. They're pretty much just for looks anyway.

Removing your factory OEM hood catches is relatively easy, if you know the right size tools to use. I tried crescent wrenches, adjustable wrenches, socket wrenches, and extensions. I finally was able to find a longer 10mm socket in my drawer that reached inside the hood, at an angle, without rubbing up against the hood or being too long that I couldn't get the socket onto the head of the bolt. After figuring this out on my own [no instructions included in this kit] I was able to go ahead and remove the old bolts and assembly, and then install the new bolts and assembly. The kit includes hood buffer rubber grommet pads that are adhesive backed. I haven't had the hood catches on my Jeep long enough to tell you if these pads will eventually wear out or fall off the vehicle. I think they should hold down simply by the sheer force of the steel hood catches when the hood is fully secure. The hood is not going anywhere. I would rate these Hood Catches as overall very good quality, they could have included a rubber gasket or some sort of material in-between the steel and the hood of your car. It is basically metal on metal contact. If you're going to do this I would say that you better want to because I would suspect that either the bolts or your hood will eventually rust. Maybe the hood catches themselves being made out of marine grade stainless steel won't break down anytime soon it is rather difficult to put these on without at least slightly scraping the paint of the hood a little bit. Luckily my car is silver so it's hard to notice. The strength of the latch on these is 2nd to none. There's zero hood buffeting or any sort of reaction to excessive winds. I was in a very windy blizzard on the highway and normally my hood would be flopping up and down, but not with these. As a result it is difficult [at least in my opinion] to get the hood latches to fully engage without either pushing down on the hood to give yourself a little leverage, or using 2 hands and heaving the assembly into the lock retainers and immediately pushing forward until it latches fully. There's probably a way to mount these a bit lower, but to me I would rather have them be really tied down tight than allow for any wiggle room. I've only had these about 2 weeks so I cannot comment on rusting, corrosion, if they break. I would suspect it to be fine. I know from the sheer force needed to fully tighten the included bolts this thing isn't going anywhere unless I take 30 mins to disassemble them again. Overall I would recommend this product. I just really hope it doesn't promote any sort of rusting of the exterior of my Jeep.

Much stronger than the latches that jeep puts on in the production stage.