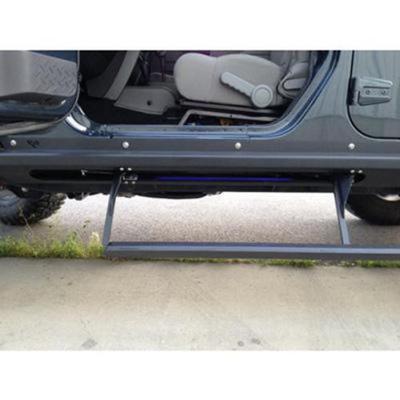 We Pay The Sales Tax!

This item may experience shipping delays

Will this product work with the stock rock slider on the 2015 Rubicon unlimited?

Asked by Prado from St. George, Utah on

Hello Prado, Yes, this will fit the 2007 to 2015 Jeep JK Wrangler Unlimited 4 Door. Thank you for the question.

Answered by from St. George, Utah on

What is the maximum weight the step is rated to support?

Asked by Bill from Phoenix, AZ on

Thanks for the inquiry Bill, the Rock Slide Engineering Step-Slider part # RSEBD-SS-100-JK2 these have been tested with 400-500 with no problems and are rated per RSE at 600 pounds per side.

Answered by from Phoenix, AZ on

Asked by Sam from Odessa tx on

Answered by from Odessa tx on

Since 2004, Utah-based Rock-Slide Engineering has been steadily producing exterior bumpers for 4x4s and the company has evolved to manufacture drivetrain and lighting products as well. Being situated in the rocky desert region is ideal for Rock-Slide to test their creations in real-life off-roading country, and Jeep enthusiasts appreciate their attention to detail and durable construction that comes through in the clutch. Whether it's Tierra Del Sol, Moab Easter Jeep Safari or Truck & Jeep Fest, you'll find Rock-Slide's lineup on hand and in action. Protect against rocks and trail hazards with heavy-duty Rock-Slide bumpers that still exude a sense of style. Shop Rock Slide Engineering Now