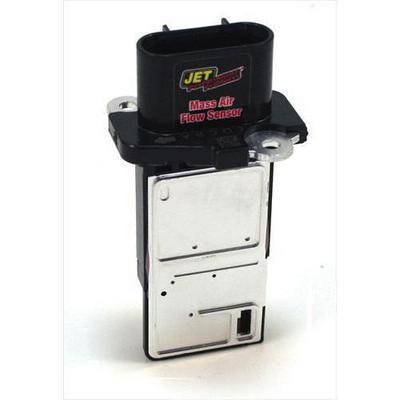 The JET Powr-Flo Mass Air Sensor delivers improved horsepower, torque and mileage from your vehicle by simply replacing the restrictive stock mass air sensor. The factory sensor not only is a major restrictive point in stock intake systems, but it also limits the full potential of aftermarket cold air intake systems.

Advertised as a fix for cold air induction that kick check engine light for mass airflow sensor. Did not work any better than the cheap sensors but cost 4x as much.

noticedable increased perfomance, much better gas mileage on hwy and feels like a better launch off line when used with a CAI...

Since installing the Powr-Flo Mass Air Sensor I have noticed a difference in the performance of my car and most notably my throttle response. I have noticed it a little dip in mpg city, but I take into effect that I have a heavier foot now. It was a great addition to the K&N Cold air intake kit I installed the week before.

It looks just like the stock part. But it feels like it adds some power. would have to dyno it against stock to tell. plug and play, never set off any emissions codes or anything like that. Overall satisfied.

The install was simple and only took 5 min And I had instant horse power.

Q: then do you think you will have a mass air flow sensor for a 2021 toyota tacoma 3.5 Answer this question

A: The Jet Performance Products V-Force Plus Performance Module - 67030 is currently available for the 2021 TOYOTA TACOMA - 3.5L - 2TRFE

Q: Does this fit a 4.0 v6 tacoma with a supercharger and cold air intake Answer this question

A: If it's a stock supercharger than yes. It will not play nicely with a K&N cold air intake with a oiled filter.

Q: Will this work with my procharger Answer this question

Q: Any value to this without CAI? I am in CA and CAIs are not legal. Answer this question

A: There is value on its own. Per JET Performance: the flow bench tested design of the JET Mass Air Sensor provides airflow increases of up to 45%. You should also know that not all cold air intakes are illegal in California. They just need to have given exemptions (E.O Number) by the California Air Resource Board (C.A.R.B). This particular MAF sensor is for a Toyota Truck V8s and Tacoma 4 cylinder.

Q: I'm looking to install a new mass air flo sensor on my 97 ford explorer sport 4.0 automatic ac car.Can you tell me what part would fit my application? Answer this question

A: Hello The correct part number for your Explorer is JET 69114 it is not on our website but I did get the number from the JET website. Thanks

Q: I have 2010 chevy silverado 5.3L 4x4 I'm currently running airraid cold air intake and airraid throttle body spacer along with a mbrp exhaust, will this be compatible with my intake and if yes, what kind of performance increase will I possibly see. Answer this question

A: The Jet Performance Products Powr-Flo Mass Air Sensor would be the perfect addition to your 2010 Silverado. With that many modifications you should see between 10-15 hp. Hope this helps!

Q: I have 2010 chevy silverado 5.3L 4x4 I'm currently running airraid cold air intake and airraid throttle body spacer along with a mbrp exhaust, will this be compatible with my intake and if yes, what kind of performance increase will I possibly see. Answer this question

A: Thanks for the inquiry Josh, the Jet Performance Products Powr-Flo Mass Air Sensor part # JET69125 this part is compatible with your modifications.

Q: Just wondering will this Maf fit on a Air raid intake already installed on a 2008 f-150, with a 4.6L. Also considering a throttle body spacer. Thanks Joe Answer this question

A: Yes the Jet Performance Products Powr-Flo Mass Air Sensor will work with any intake you install. Hope this helps!

Q: I HAVE A 09 GMC SIERRA SLE 6.0 W/K&N COLD AIR INTAKE WILL THIS WORK FOR ME? I HAVE A CHECK ENGINE LIGHT ON SINCE I HAD THE INTAKE INSTALLED. IVED TRIED CLEANING THE M.A.S. BUT CHECK ENGINE LIGHT COMES BACK ON AFTER A WHILE. AND I ALSO HAD DYNOMAX DUAL EXHAUST INSTALLED ON THAT SAME DAY . Answer this question

A: Joe- Thanks for the inquiry. The Jet Powr-Flo Mass Air Sensor is not a replacement Mass Air Flow meter. It requires custom tuning. I would have a professional mechanic take a look at your truck to properly diagnose the problem before replacing parts that may not be necessary.

Q: For instants, would there be any increase of horsepower if i were to have a air intake install in my vehicle and the jet mass air sensor? Answer this question

A: Jorge any time you remove an obstruction in the intake of your engine you will make more power as the engine get more air with less work to get it. Using a larger mass air sensor is a must if you plan a larger throttle body Thank you

Q: What type of performance upgrade can I see from the installation of this product. There is no advertised improvements in your ad fro this product Answer this question

A: There is not a quoted horsepower increase from the Jet Powr-Flo Mass Air Flow Sensor because it will depend on what other mods you have done to your vehicle.