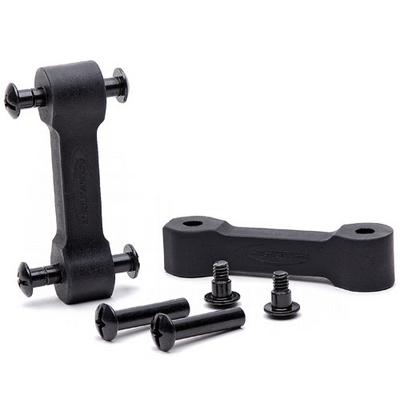 Daystar's Hood Wranglers stop the flutter on your 2007 and newer Jeep JK Wranglers. Constructed of heavy-duty polyurethane, the Hood Wranglers provide a more positive lock that keeps the hood securely shut for peace of mind!

Easy to install. Absolutely ZERO flutter in the hood now. I would highly recommend these latches to anyone with a Wrangler!

These new hood latches look great being red and all they match my 10th anniversary rubicon unlimited perfectly. They also solved the problem of “hood chatter” they are definitely more rugged/durable and tighter than the stock rubber latches. Yes I recommend them!

This is the third set that I have bought for two different JKs. The most recent purchase was for the same reason as thr original 12yrs ago, to stop the hood flutter. They work great and I get a kick out of watching people try to open for the first time.

The instructions called for removing the lower hood catch from the Jeep, but I just use two (2) needle nose vice grips to remove the plastic pins and twisted them until they broke! It was 70 degrees outside during my installation, but they were still hard to close, but I like how they secure my 2007 Jeep Wrangler X now!

Installed on my 2014 Wrangler Sport after one of the factory hood latches failed on the highway. The Daystar part is a definite improvement over the factory rubber latches and I now have no hood flutter on the highway,even in high winds and passing semis.

These are great. Completely stop the hood flutter. Affordable fix to a scary problem.

Driven by design, Daystar has been designing and producing premium 4x4 components for nearly 40 years. Primary products for Jeeps include lift and leveling kits, dash panels and hood accessories and Daystar manufactures parts and accessories for Wranglers, Cherokees and Liberties. When factory parts are not up to par, upgrade to Daystar's line of unrivaled, ISO-certified plastic products for a variety of applications. We carry switches, isolators, bump stops and more so improve performance on the trail and for your everyday driving. When you've got the guts to go off-road, Daystar products help make your ride a revelation with unrivaled products. Shop Daystar Now