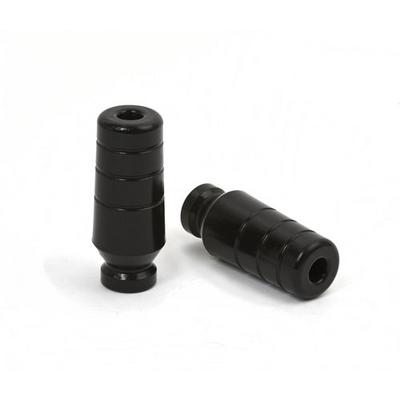 Bump Stops are a critical part of your vehicle's suspension - they prevent damaging over-compression and eliminate harsh bottoming of the suspension. Daystar's Bump Stops are designed and tested under the most rigorous conditions imaginable to deliver positive stopping power without deflecting.

I needed new bump stops on a 99 TJ. Stock ones were worn out and since I was installing a 2" lift I thought it was a good time to replace them. They bolted right up with no problems and I'm using them at the full lenght on the rear (5") and I cut 2 inches off the fronts. Rides great ! This isn't my off road rig. Daily driver with occasional dirt roads/hills

I am sure that these are great bump stops! (For a different truck) and that someone would love them (assuming that 4WP can get them two that match).

3.0 Stud size not as advertised

I did a 4 link in the rear of an XJ with coils and in the initial build I used a short 2" bump stop with a 3/8" studs. To use the full travel of the shocks I needed longer bumps. I found these, and although 4WP doesn't list the size of the stud, other sources showed it to be 3/8". They turned out to be 7/16" so they obviously wouldn't fit. I ended up pressing out the 7/16" stud and replaced it with a 3/8 bolt with a 1/2" nut welded on the bolt to prevent it from spinning in the bump. I then pressed the modified bolt into the bump and it works fine.

Finally found bump stops that fit my 1985 Dodge W350. Thanks to 4 Wheel Parts, they took the time to measure their Bump Stops until they found one that would fit. Glenn

Perfect for a 1st gen ifs 4runner if your torsion bars are cranked up.

I installed these on my 2000 Tj. I removed the rear tires, one end of the trackbar, bottom shock bolts and lifted my jeep up from the rear bumper to remove the coil springs. You might also need to remove the back end of your rear drive shaft for more flex and mabye one end of your control arms.To remove the stock bump stop just wrap your hands around it and work it back and forth while pulling down and it comes out, its pressed in. Remove the bolt that is in the center of the cup. I put a light coat of lube on the new bump stop around the top edge to make it easier to install and get the bolt started in the threads. I then used a pipe wrench on the metal part to get it snug.

Q: Hello. Do you know if these will fit for a 2008 4Runner for rear bumpstops? Answer this question

A: These bumpstops are universal. Depending on the bumpstop's location and its bolt mounting location, this may or may not fit.

Q: What are the dimensions? What is the thread?  Answer this question

Q: is the price for two? Answer this question

A: Hello Superflight The DAYKU09007BK comes as a pair. Thank You for your question. Jon Snyder

A: Hi Steve, The DAYKU09038BK Bumpstop has a 10mmx1.5 thread and the stud is 1.25 inches long. The bumpstop is 1 inch thick and is 2 inches in diameter. I hope this is helpful. If you have any questions let me know Thank You Jon Snyder 4Wheelparts

Q: Do these mount to the factory location on a jeep cherokee xj? Answer this question

Q: Hi I got a 1996 jeep grand Cherokee limited will this fit the front or the rear Answer this question

A: Hello Gadman, The Daystar Polyurethane Bump Stops are made to fit a 1993-1998 Jeep ZJ Grand Cherokee.

Q: Are these sold individually or by the pair? Answer this question

A: Thanks for the question. Daystar Polyurethane Bump Stop These are sold individually. Thank you.

Q: What are the dimensions of these bump stops? Thank you Answer this question

A: Hello Karl, You will need to contact Daystar direct for exact specs on this bumpstop. We only have shipping dimensions at this time.

Q: asking if this product is a good oem replacement for my 91 f 150 Answer this question

A: Hello there, Daystar has always met our customers' needs by designing and producing the highest possible quality parts. Since 2000, Daystar has been certified ISO 9001, and we currently hold ISO9001:2008 certification. This demanding certification, recognized worldwide, ensures our customers that the entire process, from design to shipment, is independently verified and documented to meet or exceed our customers' expectations.

Q: 1986 cj7 will these bolt on in place of the old bumpstops. The spacing is appox 4 1/4 center to center on the mounting holes.? Answer this question

A: Hello Sam and thank you for your question! Prothane Motion Control 2 Inch Coil Spring Lift Kit could fit 33" tires or 35" tires with minor trimming. I hope my answer helps 4 Wheel Parts earn your business!

Q: I have a 2000 Jeep TJ. My bump stops are completely rotted away. I am planning to add new coil springs and shocks that have a 2" lift. Bump stops did not come with the kit. Will these work for my purpose? If not, can you recommend some that will? The jeep is in stock condition now. Answer this question

A: Thanks for the inquiry Walt, the Daystar Polyurethane Bump Stops part # DAYKU09037BK these extended front bump stops will work great when you lift the vehicle.

Q: what is the length of these?? Answer this question

A: Hello Jeff, Thank you for asking. The Daystar Polyurethane Bump Stops part# DAYKU09037BK are 5 inches long and have a 10mm stud.

Q: Is the price for the pair or each? Answer this question

A: Blaine from California, Thanks for the question.Part # DAYKU09009BK is for a pair.

A: Hello Glenn, Thank you for the question. Yes,

Q: Does this come as a pair? Answer this question

A: Hello James, Thank you for the question. Yes, the Daystar Polyurethane Bump Stops DAYKU09037BK are sold as a pair.

Q: What is the spacing of bolt holes, center to center? Answer this question

Driven by design, Daystar has been designing and producing premium 4x4 components for nearly 40 years. Primary products for Jeeps include lift and leveling kits, dash panels and hood accessories and Daystar manufactures parts and accessories for Wranglers, Cherokees and Liberties. When factory parts are not up to par, upgrade to Daystar's line of unrivaled, ISO-certified plastic products for a variety of applications. We carry switches, isolators, bump stops and more so improve performance on the trail and for your everyday driving. When you've got the guts to go off-road, Daystar products help make your ride a revelation with unrivaled products. Shop Daystar Now