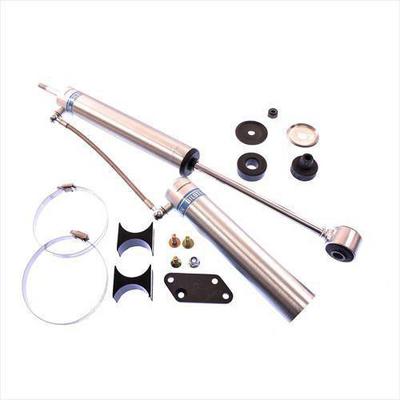 BILSTEIN 5160 stock mount remote reservoir shocks are a direct-fit for your lifted truck, Jeep or SUV—no cutting or welding required. 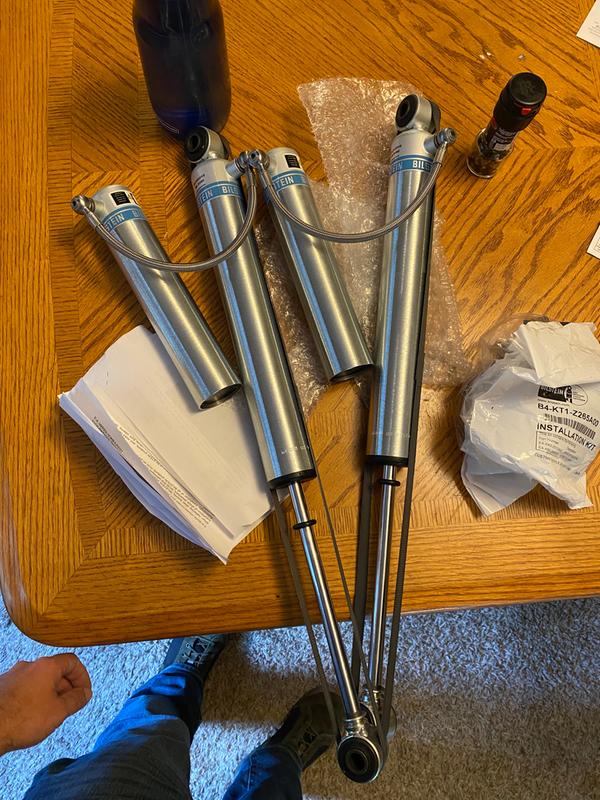 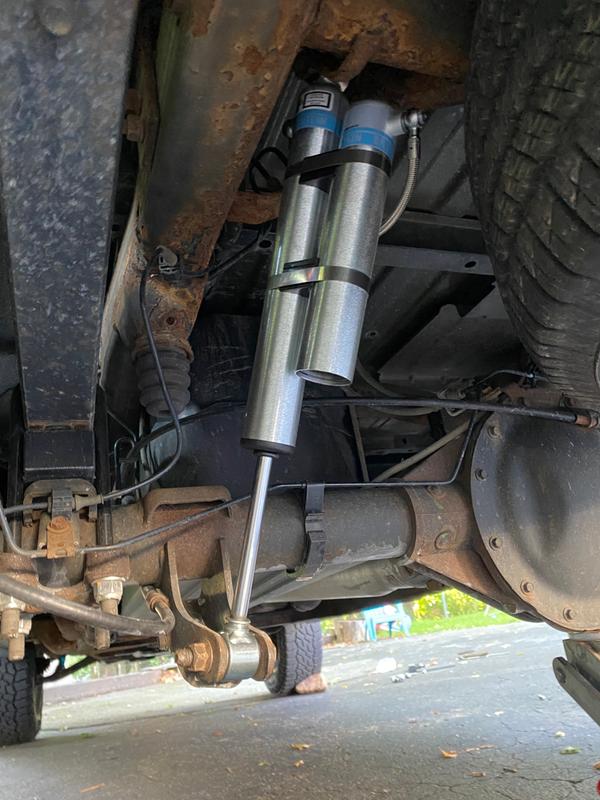 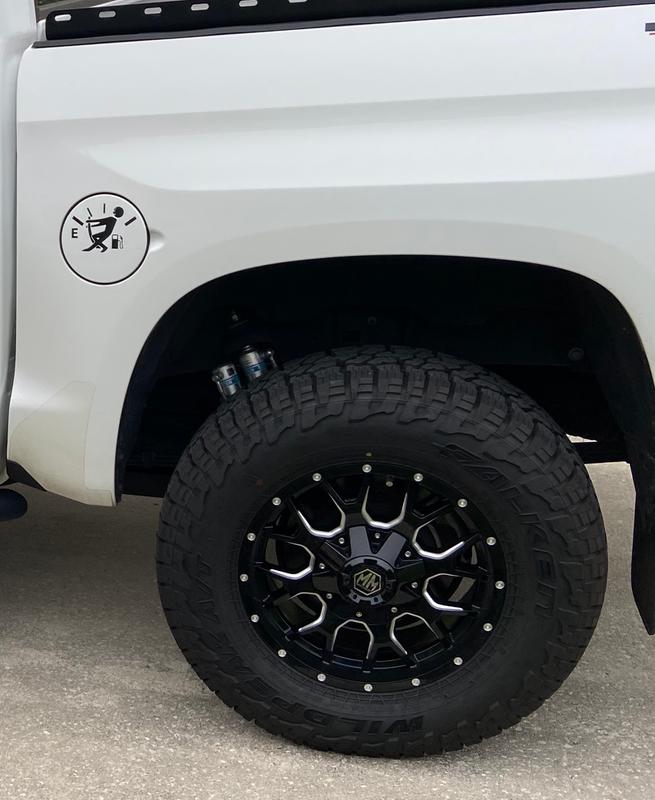 Bought these as supplemental rear shocks while I rebuild/revalve my KINGS. Honestly I think I'll take my time revalving the Kings so I can try to get them to ride smoother. In the mean time these Bilsteins are truly impressive! Very satisfied. I haven't had them long enough to speak to their durability but they certainly perform just as well as the Kings did on my F150. They provide a much smoother on-road ride quality. Softer than the Kings but not too soft. They are firm enough to keep the truck from bouncing on the leaf springs but soft enough that they dont throw the back end around when things get rough. The Kings were valved with too much compression and would cause the back end to be way too firm. Washboard at slow speed was a nightmare. The faster you go, the smoother the Kings would get. But slow speeds didnt even move the shaft. +1 Bilstein

Had them on the truck for about a month now, feel slightly stiffer but not much different from factory ride. The short dirt road I’ve driven on, the truck has been smooth and responsive. I’d recommend them.

Good product, not quite as stiff as I had hoped. Tundra still seems to hit stops on big bumps.

5.0 Get the parts you want, cheaper, and sooner.

The 5160's are great shocks, shipped fast and free, got a coupon code online and even saved some money for other truck stuff.

By Anonymous from Central Massachusetts | 9/21/20

Great shocks for the money! I combined with Coach builder shackles in the rear for almost 2” Lift. Also used Bilstein 6112 and shins for 3” lift in the front.

A: They fit my 16 Trail KDSS perfectly. Now I have a Trail PRO

A: The notes that Bilstein has about these shocks are that they fit up to 2" rear lift and that they do not fit X-REAS suspension.

Q: Do you have these in stock? Looking for two. Answer this question

Q: Is this a single shock or a pair?  Answer this question

A: This is sold individually.

Q: Will this fit a 2019 Silverado RST (not a trail boss) with a 2” block added to the rear end? Answer this question

Q: can i still used this after installing a 4'' or 6'' lift kit? Answer this question

A: I cannot say without knowing which specific vehicle you have or which lift kit you have installed. Please feel free to call our Customer Service Line at 1-855-554-2400 and they can help find the right shocks for your vehicle.

Q: Is this a pair or just the one singular shock? Answer this question

A: This shock is sold individually.

Q: Can I place these in front instead of rear. The compressed and extended length are accurate with the my current front shocks. Answer this question

A: Hey Anthony, We need a little more info about your setup to get you the correct parts. Please call our sales line Toll Free: 1-877-474-4821 Thanks!

Q: Do they work with a level kit 3"? Answer this question

A: Would depend on the application. We need a little more info about your setup to get you the correct parts. Please call our sales line toll free at 1-877-474-4821

Q: Will this shock fit a 2013 Toyota FJ Cruiser TT? Answer this question

Q: Is this a pair of shocks or just one shock? Should I order quantity of 1 for the front or 2? Answer this question

A: Hello Faiz The BIL25-176414 is a singe remote reservoir shock. They are sold each. They are an excellent choice. They provide excellent ride quality and control. They control rebound far better than most shocks. The mono tube body and remote reservoir will do an excellent job of dissipating heat as well. Thank You for your question. Jon Snyder 4Wheelparts

A: Hello trav4224, This part number will fit the rear of your vehicle front stock height to 1.5" of lift only. Thank you.

Q: Is this shock just for the rear Answer this question

A: Hello sorry for the slow response seems your question got lost. This shock is designed for front and rear depending on what you need them for. This is just a sample picture they offer over 3000 part numbers in this shock style. Thanks

Q: I have 2006 dodge ram 1500 2wd. How can the resevoir work with my coil, wouldnt the coil pinch the resevoir line when compressed, there is no other way it can fit unless the shock is used without my coil. Answer this question

A: Hello karl, The Bilstein 5160 Series Reservoir Shock Absorber Part Number: BIL25-187595 will not fit your vehicle application. Thank you for the question.

Q: Will these shocks fit on all corners of a 2005 Ford F250 with an 8" lift. Is this the price per or per pair? Answer this question

A: Hello Jamie, the Bilstein 5160 Series Reservoir Shock Absorbers will fit your f-250. The price will be per shock. Thank you for your inquiry.

Q: Will these work with my 04 HD2500 duramax with a 6" RCD lift ,single shock up front ,no hoop ? Answer this question

A: Thanks for the inquiry Dwsncrw5, the Bilstein 5160 Series Reservoir Shock Absorber part # BIL25-187687 is correct for the front.

Q: 2003 Chevy silverado 2500 hd 4wd. I have close to a 10 inch lift and am wondering if these will fit for my front shocks? If not, which ones do I need? Thanks. Answer this question

A: Hello D, Thank you for asking. On the Bilstein 5160 Series Reservoir Shock Absorber are only listed for 6 inches of lift. The only way to get a 5160 series for your application, you will need to get the extended and collapsed length of your current shocks and call Bilstein, they can try and find a part number that will work for your application.

Q: Would this fit on my 02 chevy Silverado 2500HD with a 2in body lift on it? Answer this question

A: Thanks for the inquiry cody, the Bilstein 5160 Series Reservoir Shock Absorber part # BIL25-187687 will fit your year with a 4 inch lift. The body lift won't effect the length of the shock.

Q: is this the correct part number for a Ford 2008 F350 SD Lariat long bed 4x4 with a 6" lift? what are the advantages to these over the 5100 series? or do you feel another brand would be best suited for 50/50 on-road/off road and pulling a 30" race car trailer (long trips) Answer this question

A: Hello KC, The Bilstein 5160 has an external reservoir that help dissipate heat in the shock body. They are preferred by vehicles that drive mostly off-road or on highways with rough surfaces. The correct part number for the front of your vehicle is BIL25-177435. Thank you for the email.

Q: I have a 2006 gmc sierra 2500hd with 6in a arm lift. will these shocks fit? what is the shock length suppose to be? can these shocks come with boots too? Answer this question

Q: I installed 3" ProComp torsion keys on my 2003 1500HD. My shocks are OE. Are these shocks overkill? What do I need to install when collapsed...extended...and travel over my OE shocks? Thanks. Ryan B. Answer this question

A: Ryan, Upgrading shocks to a Bilstein 5160 Series Reservoir Shock Absorber BIL25-187687 would be a great addition to your 3" Pro Comp Torsion Key Lift Kit. They will help provide a smoother ride quality on and off-road. For specific applications we would need to know more about your 2013 1500HD.

While the ThyssenKrupp Bilstein Company began as a German enterprise, Bilstein shocks are developed and manufactured in Hamilton, Ohio. Bilstein develops and fabricates premium quality monotube shock absorbers directly for automobile manufactures, aftermarket outfits and motorsports applications. The precision and craftsmanship in manufacturing that fueled company growth in Germany were brought straight to the factory in Hamilton, Ohio. The factory includes an engineering department, rigorous shock testing facility and a motorsports track. The track allows the engineers to tweak their designs in response to real world testing during development. The rigorous testing allows for designs to go through a machine simulated life of a shock absorber in all kinds of terrain conditions. The resulting products promise the highest in performance. Shop Bilstein Now