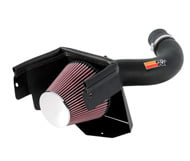 One of the most commonly overlooked truck parts is the air filter. Maybe you replace it every one in a while when your mechanic tells you it's time, but you probably don't give it much thought. This is a shame because upgrading your air intake system is one of the simplest and most affordable ways to improve the performance of your vehicle.

The general idea is that when you replace the air intake system, this upgraded truck part will have a thicker hose, better filter, and improved cooling box to let the car "breathe" easier. The more cool air can get to the engine, the better it's going to perform, which ultimately increases horsepower, torque, and can actually save you gas in the long run.

So how does it work exactly? The basic principle behind these truck parts is to introduce a larger amount of cool air to the engine. Cool air is denser than warm air, so in the same amount of space, cool air will have more oxygen molecules than warm air because it is packed together tighter. An air intake system will bring more, cooler air to the engine, introducing a larger amount of oxygen to mix with the fuel. When more oxygen mixes with the same amount of fuel, the combustion is much stronger, providing more power for the vehicle without using any additional gas.

One of the ways an air intake system manages to do this is by relocating the filter away from the warmer engine components, so air filtering through is not as affected by the surrounding temperatures. Aftermarket air filters are also generally of a higher quality than factory ones, which are often times made out of paper rather than foam or other more effective materials. Another truck part that can have a large effect is the inlet pipe. Upgrading the factory pipes to something that is better suited in length, diameter, and size will increase both the amount of air coming through as well as the force of the air.

While you can certainly wait until cold weather hits to rake in that extra fuel economy, there's no reason you shouldn't be able to benefit from truck parts that will provide colder air year-round. Each air intake system only averages a few hundred dollars. Compare this